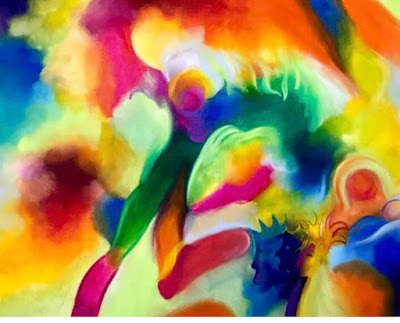 Many adult students sign up for workshops because they are drawn to learn this type of art. Somehow they recognise in them, that they will benefit from it. Many need to heal themselves from trauma - in this life or to reset a repetitive pattern that existed before this life so that they can extend beyond it.

Through free energy art a person goes into silence, into the superconscious mind, accesses universal consciousness, and then comes back, bringing with them a residue of stuff that exists in their subconscious mind that requires healing.

The idea is that a person becomes progressively lighter and can then live in balance. 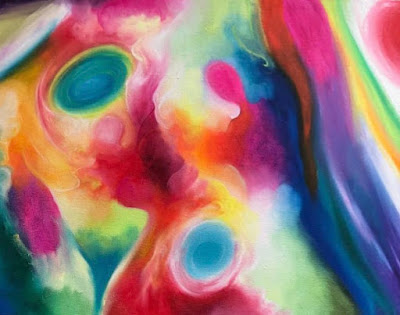 Workshops are always perfectly measured, with the right people coming along according to who needs what from whom. The class operates above and below, with the room being packed with guides and helpers from beyond the veil.

Approximately two years ago, a guy joined that had been struggling with his mental health and mania for many years. I was so glad that he was willing to commit time to energy art in order to begin the journey of self healing. It was also interesting and a privilege to be able to share this journey to see in what way this process could help.

Free expression art, energy art, channelled art, spiritual art, visionary art, psychic art are all labels that could be given to this type of art.

To some onlookers they glance at it, seeing only colour, and they dismiss it. Maybe they are not ready. Maybe they are too in their minds, trying to think what it isn't. 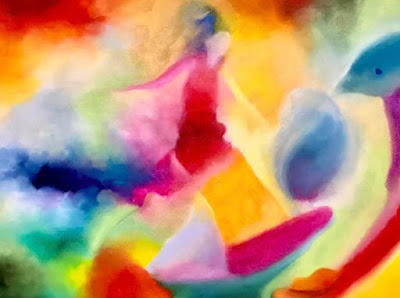 Many miss the energy of it, the depth and the message and maybe that is right, as all of this information is meant for the healing of the creator - locked into the painting like a secret code showing itself only to those that are aware enough to realise that there are doors........

Many of them - to other planes of consciousness - accessed in the no mind state, through art. Without trying, but with an openness of mind and a freeness of purpose. In an allowing state.

This guy that showed up for art was ready to try anything and so we began working together on a canvas each week, with spirit knitting our energy together as we worked - egolessly.

The results were amazing. First of all, at a glance, the canvas - painted with oil paints - seemed to be merely covered in shapes. We would rotate them round, viewing them each way up until images began to appear as if cloud gazing.

Nearly always, figures showed themselves - many of which wearing a turban, but this was only apparent after the second phase of work - giving depth to elements of the painting - revealing what had been laid down.

I was interested to learn that part of this guys mania involved him wearing a turban and being a king. It was as if he was tuning into a past life experience. 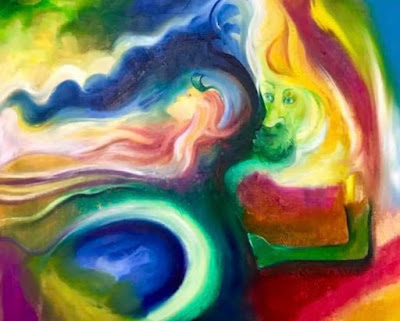 We have continued to work together in this way, each week - the idea being that the familiarity of it treads a well worn path of connection between here and spirit, allowing him to have control of his own doorway. 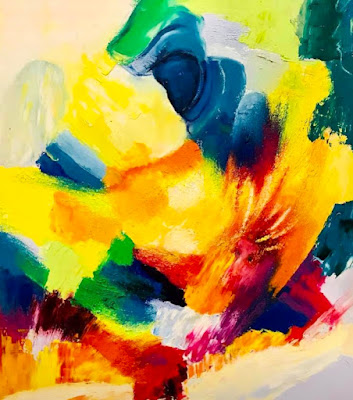 Unfortunately he is on monthly injections of a mind altering drug that has embedded him deep inside himself.

It's a difficult situation of awakening him through the fog, raising his vibration up so that he can recognise the voices if and when they appear once his medication has been reduced.