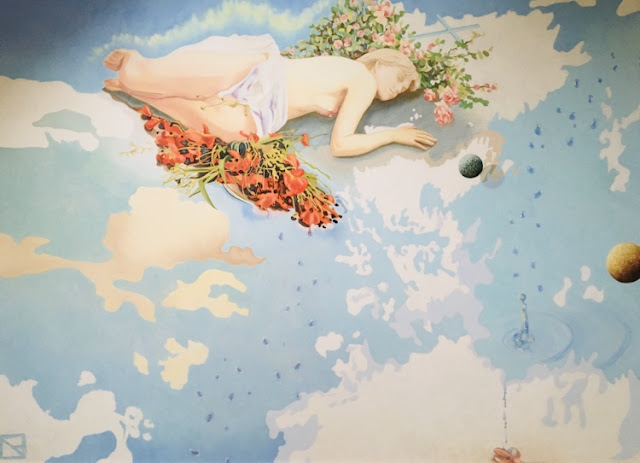 While having complementary therapy, the lady that I was seeing, asked me -

'Do you mind if I speak to you about something other than the reason that you think you are here?'

She suggested that I enrolled in courses at The College of Psychic Studies and considering that we'd had no personal discussion, I was stunned.

I was given a brochure, enrolled for several courses and began trekking up to London several times a week for two years.

It was there that I learned that I was not nuts. That there were more of us.

So far I'd seen devils, witches, entities, dark masses, part formed beings, angels, regular human spirits, heard voices - within and without and seen a complete transformation of my art. 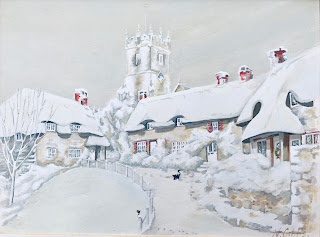 The beautiful snowy, cottage images had given way to art that gave me information. The silent practice of painting gave rise to art that came with a clear message. A complete knowing what the painting was about.

Meanwhile at The College I learned that energy was flowing into me but not through me. It was getting stuck somehow. There was a battle going on. 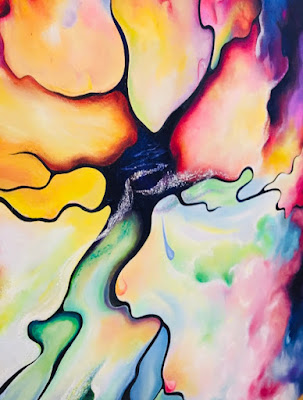 It was a battle with my heart. One where I needed to forgive and send love to someone that had repeatedly caused me pain. My heart had closed to protect itself and I had no idea how to operate it. When would I know it was fixed? What should I do to mend it?

I had a lot of fear in my life - what with the entities and ton of stuff that made no sense and yet was real because I had seen it with my own eyes.

It was then that I realised that I had come to the end of my learning at The College for the time being.
I knew I was not special - I was hearing that from a Higher Source. But some would say I was because I had abilities that others did not.
I had begun practise of sending love.
I knew in my soul that we are all innately the same, so if I could experience something then so could others even if they had not yet discovered that they could do.
Maybe I was a forerunner. Not really. I weighed up in my mind all those that had gone before.

Then I heard that I was a Wayshower, so I Googled it.
It was a real thing and there were others - here to show the way, to guide people to shift their consciousness.

The study of consciousness became a massive thing for me for ten years, and all the while I remembered the earlier days at St Pancras.

During this decade I experienced much. I heard light and dark. Good and evil. I had the dark inside me and remember the exact moment when the penny dropped and I could distinguish it as different from myself. A malevolent entity that was contained within my skull with me.

Up until that moment it had seemed that all the information in my brain / mind was of me, but it was now clear that all ravelled up in a tight ball was several sets of information, with only part of it being mine. 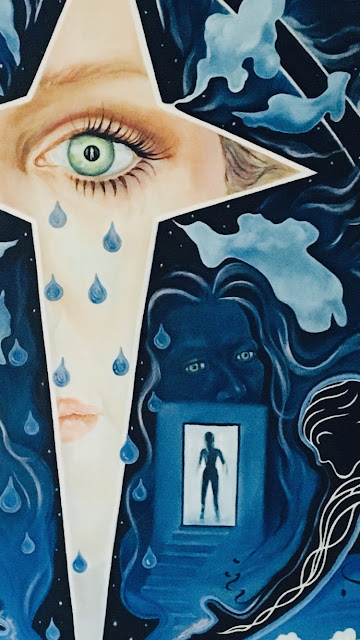 It followed three months of cocaine use - that was out of character for me. My system had been pristine and now I had muckied it with a dark substance. I had blown my crown chakra wide open and now anything drawn to the light - as a sharks feeding frenzy - could enter at will. And it did.

I communicated with it and tried to force it to leave but it just remained. Always in the background with negative interjections.

It was a slow process of recovery that re-reminded me to once more connect with my heart centre. To find my love. Wholeness. Health. Mental clarity. Joy.

I now had an affinity with the patients form years before and wondered what had come first for them. Had an unfoldment in life triggered their voices? Had it been caused by drugs? Where they more sensitive? Had hospital administered drugs compounded the problem?

It was clear that they had an issue with the crown chakra. It was not functioning. It was open, and they are unaware of the need to man their own doorway.

Ironically, the drug use helped me. It expanded my awareness of something that otherwise I would have been oblivious to. It was the missing piece in the puzzle and I was able to finish this painting that had taken seven years to paint as I did not understand it.

Now I know that seven years is a spiritual year. I was meant to experience all that I did as part of a consciousness fact finding mission.

The energy on the planet was relatively dense at the outset of this painting, but as new comers came to earth and more art students came to learn, as well as my own consciousness understanding being brow beaten into submission, I came to know that we are 5th dimensional beings. That we are vessels that can be filled with light or dark, and that ultimately we have a choice.